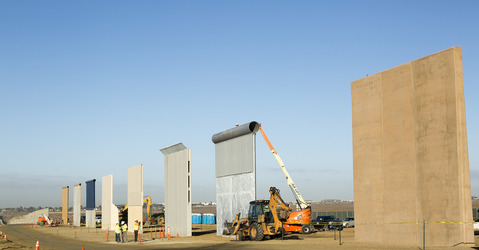 N/A by N/A is licensed under N/A
A U.S. construction company is making a formal, unsolicited offer to Trump administration officials in Washington this week to build 218 miles of wall along the U.S.-Mexico border for $3.3 billion and have the entire job completed in 13 months.

Arizona-based Fisher Industries President Tommy Fisher is meeting this week with top Department of Homeland Security officials, along with Democrats and Republicans in Congress, to sell his plan, the Washington Examiner has learned.

Replacement and new wall projects have struggled to get underway in Trump's first two years in office. Less than 50 miles of wall have gone up in that time. House Democrats, leader by Speaker Nancy Pelosi, D-Calif., remain adamantly opposed to anything deemed a wall along the southern border — instead emphasizing other security measures like more border guards where necessary, drones, and other high-tech approaches.

Still, Tommy Fisher said it can build 218 miles of 18-foot steel bollard fence, along with paved concrete roads, lighting, and technology for $3.285 billion, a fraction of the $5.7 billion President Trump requested from Congress in December for a 234-mile project.
N/A by N/A is licensed under N/A