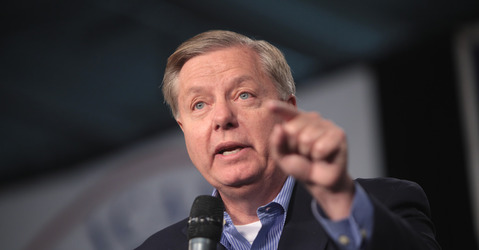 N/A by N/A is licensed under N/A
Vice President Mike Pence is making a trip to South Carolina to help kickoff U.S. Sen. Lindsey Graham's bid for a fourth term. Graham's campaign says Pence will be with Graham at events in Myrtle Beach and Greenville on March 30.

In a release, Graham praised Pence as "a strong ally and close friend." The 63-year-old senator has often fielded challenges from the right in his previous re-election campaigns, subject to criticism that he's been too willing to work with Democrats to accurately represent conservative South Carolinians. Graham has become a congressional ally to the president as of late, often seen taking part in a round of golf with the president on weekends and conferring with the president in phone calls before major votes.

Pence was in South Carolina last year to campaign with Gov. Henry McMaster, a longtime ally of President Donald Trump.

The support from the Trump administration comes after Graham defended his longtime friend and former colleague, the late Senator John McCain, after the president repeatedly lambasted the former lawmaker on twitter. Mr. Trump, in a series of weekend tweets, appeared to suggest that McCain had sent a dossier with alleged details on the president's activities in Russia to members of the media during the 2016 election.
N/A by N/A is licensed under N/A