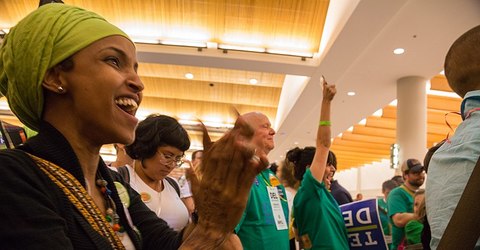 N/A by N/A is licensed under N/A
Last week, the House of Representatives finally passed a resolution against bigotry in response to Rep. Ilhan Omar’s comments that were considered anti-Semitic by many. Omar, referring to US/Israeli relations, had complained about “the political influence in this country that says it is okay to push for allegiance to a foreign country.”

Last month, she tweeted that the phenomenon of American leaders defending Israel was “All about the Benjamins baby.”

Omar has been on-message in her anti-Israel rhetoric for years. In 2012 she tweeted that, “Israel has hypnotized the world. May Allah awaken the people and help them see the evil doings of Israel.”

But Ilhan Omar is considered infallible to many who worship at the shrine of intersectionality and identity politics, as well as those in the Democratic Party who are fervently critical of the state of Israel. That is why the resolution did not even mention Omar’s name. In fact, it didn’t just single-out anti-Semitism. That would be too insensitive. It condemned other forms of bigotry such as prejudice against Muslims, Latinos and other groups.

As the Herald’s Sean Philip Cotter reported, some Democrats ran to Omar’s defense. Bay State U.S. Sen. Elizabeth Warren, a presidential candidate, said, “Branding criticism of Israel as automatically anti-Semitic has a chilling effect on our public discourse and makes it harder to achieve a peaceful solution between Israelis and Palestinians.” She said threats of violence, including those made against Omar, “are never acceptable.”
N/A by N/A is licensed under N/A