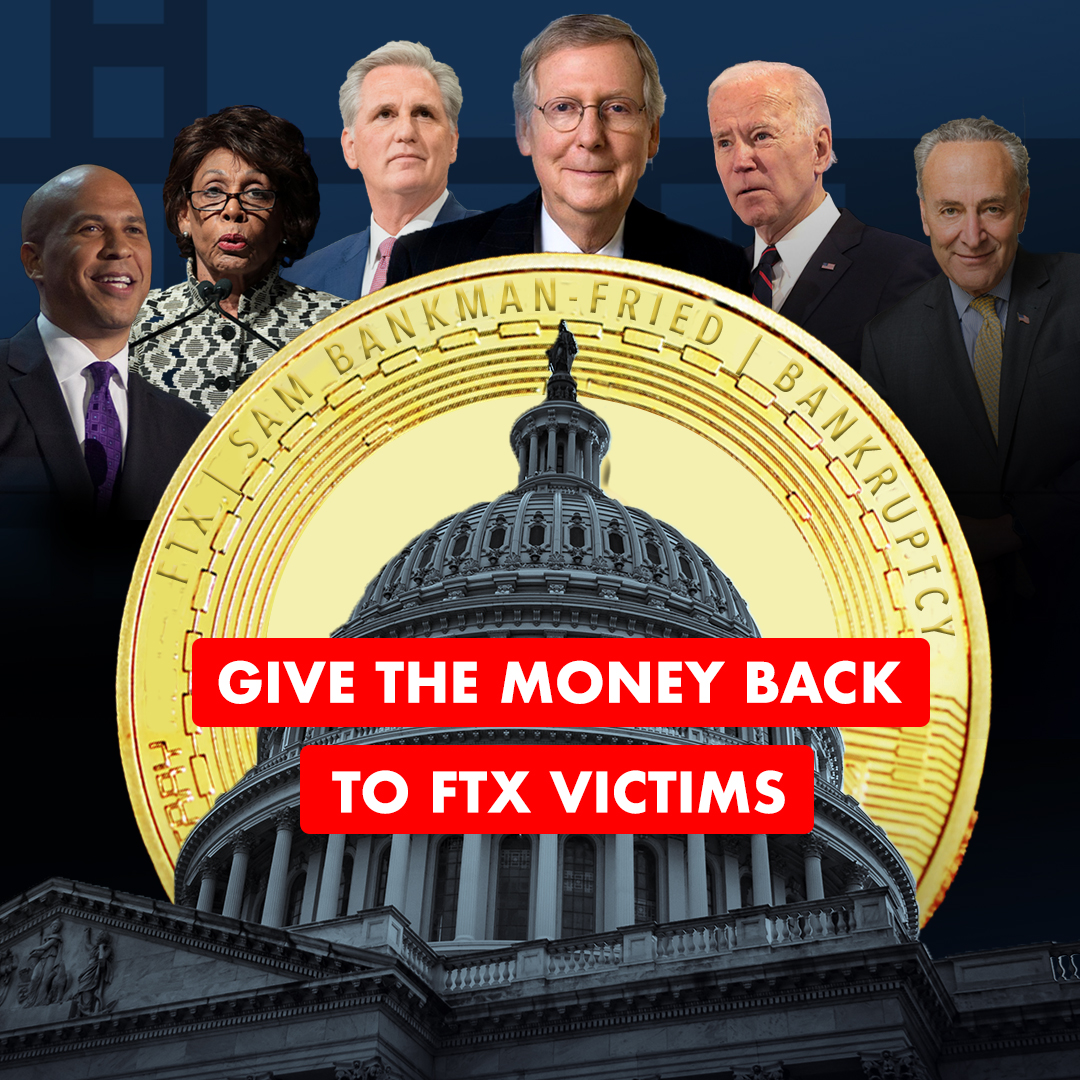 Tell Crooked Politicians To Give The Money Back To FTX Victims

Support our efforts to regulate the regulators.

The FTX money laundering operation was one of the largest Ponzi schemes in history. FTX Trading Limited and its employees knowingly greased the hands of those in charge of regulating their industry. To ensure powerful oversight committees remain uncorrupted, it behooves Democrats and Republicans who received contributions from FTX Trading Limited or its employees, to give all FTX related donations to a victims’ compensation fund.


Billionaire crypto mogul Sam Bankman-Fried is all-too familiar with money spending schemes. Earlier this year he said he used his crypto currency exchange, FTX, to “give the Central Bank of Ukraine the ability to deliver aid and resources to the people who need it most.” And if the Biden family has taught us anything about Ukraine, it’s that it’s a corrupt place used to launder money.

To support the ongoing war efforts, Ukraine established a crypto currency donation website, which would help convert crypto into paper money to buy medical supplies, weapons, and food for Ukrainian troops. Then FTX, a crypto currency exchange, stepped in to facilitate the donation of funds to contribute to the Ukrainian military.

The Epoch Times reported that Sam Bankman-Fried used FTX to support Ukraine because he, “felt the need to provide assistance in any way it could.” In practice the crypto exchange worked as a money-laundering scheme to support the Democratic Party, who in turn sent multiple billion dollar aid packages to continue the war in Ukraine. Is it any wonder that President Joe Biden approved a $800 million security assistance package to Ukraine only days after the launch of the Ukraine-FTX collaboration?


Over $39 million can buy friends in high places


Second only in Democratic donations to George Soros, FTX’s founder Sam Bankman-Fried was well-known in progressive circles for his large contributions to their campaign efforts. It’s estimated that the crypto mogul donated over $39 million to Democratic candidates. The biggest problem with this scheme is that defrauded investors were looking for a return on their investments. Instead, Bankman-Fried was lining the pockets of regulators.

Many of our representatives at the highest levels of government took FTX funds via an intermediary to distances themselves from FTX. In order to restore trust with the American people, recipients of FTX political contributions are obliged, at the very least, to return the donations to a victims' compensation fund. And believe me, they have plenty of capital to contribute. The $40 million, that you've all heard about, is what Bankman-Fried personally gave. This doesn't include his closest FTX associates that donated an additional $30 million to grease the wheels in Washington.

The mainstream media won't report on this issue, so it's up to people like you and me to hold FTX and his cronies accountable. Sign the petition, and help us regulate the regulators.