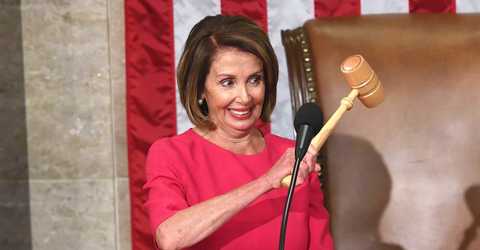 N/A by N/A is licensed under N/A
If you find it difficult to grasp how a handful of leftwing extremists managed to win last week’s battle with the nominal leadership of the Democratic Party over a House resolution originally written to condemn anti-Semitism, Margaret Thatcher explained the phenomenon four decades ago: “The one thing about leftwing politicians is that they are always fanatical. They never let go. It’s their religion.” She was describing how the Labour Party had been destroyed from within by a small minority of radicals. Thatcher eventually exploited this process, led the Conservative Party to victory over Labour, and became Prime Minister for eleven years.

The Republicans will deliver a similarly humiliating defeat to House Democrats in 2020 if its alleged leaders fail to rein in their own cadre of fanatical leftists, the core of which consists of recently elected social justice warriors Alexandria Ocasio-Cortez, Ilhan Omar, Rashida Tlaib, Ayanna Pressley, Rohit Khanna, Raul Grijalva, and Pramila Jayapal. But the internecine fight that preceded the cowardly revision of the anti-Semitism resolution into a denunciation of generic bigotry suggests that Speaker Nancy Pelosi and Majority Leader Steny Hoyer may not hold enough sway over their own caucus to prevent it from self-destructing.

Before their epic defeat in 1994, the Democrats held the House majority for no fewer than four decades. Yet, after 12 years in the wilderness, they clearly had learned nothing. After finally winning it back again in 2006, their irresponsible antics condemned them to the minority after only four years. If they pursue their current agenda for the next 18 months, they will be in the minority again after only two years. Not only can they not muster a majority to condemn anti-Semitism, their most visible members are unabashedly embracing socialism, and the first piece of major legislation, H.R.1, literally gives illegal immigrants the vote.

The Democrat majority jammed that bill, ironically titled “For the People Act of 2019,” through last Friday. At a time when the voters say immigration is the most important issue facing the nation, this pernicious bill actually loosens restrictions on voting by illegal aliens. The Illegal Immigration Reform and Immigrant Responsibility Act of 1996(theoretically) prohibits noncitizens from voting in federal elections, but H.R.1 permits them to vote in local contests such as school board elections. The GOP attempted to amend the bill so that only U.S. citizens can vote. The Democrats rejected this, of course, as Rep. Dan Crenshaw (R-TX) tweeted:

Today I offered a motion to recommit #HR1 reaffirming that only US citizens should have the right to vote. Dems rejected it. Next time you go to the ballot box, keep that in mind. The future of their party is in cities like San Fran, where illegals can vote. Let that sink in.
N/A by N/A is licensed under N/A