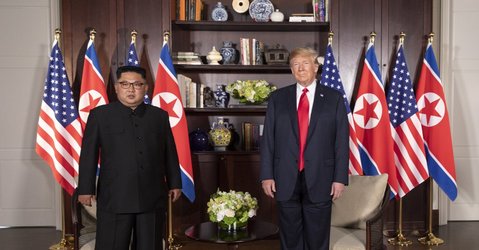 N/A by N/A is licensed under N/A
North Korean’s Kim Jong-un is blaming Team Trump’s “bad faith” for the failure to make progress on nuclear talks, which is beyond despicable in light of the news that the dictator had the gall to send Washington a $2 million bill for the medical care of Otto Warmbier, the hostage the Kim crew killed.

Technically, Warmbier was alive when North Korea sent him home in 2017. But he was comatose, and died days after his release.

Unreported then was the regime’s insistence that a US diplomat sign a form agreeing to pay for the “care” Warmbier had received. Some are sniggering that President Trump reportedly OK’d the signature, as if he should have left the hostage to rot.

Pyongyang later tried to use the utterly meaningless document to justify its seven-figure invoice. Go hang.

Beyond noting that the bill didn’t get paid, Trump hasn’t commented on the insult; he’s letting actions speak for him. Washington is ramping up its pressure on the Kim regime, fully enforcing sanctions and looking to see if it can add any new ones.
N/A by N/A is licensed under N/A