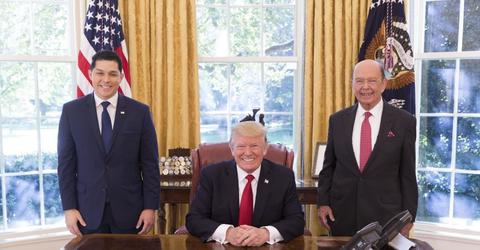 N/A by N/A is licensed under N/A
Chairman Elijah Cummings hinted Monday that his House Committee on Oversight and Reform is preparing to unleash a series of subpoenas starting this week for their investigation into the White House’s security clearance policy.

Cummings plans to authorize a subpoena on Tuesday for former White House personnel security director Carl Kline, who now works at the Department of Defense. Kline, who served in the White House for the first two years of Trump’s administration, did not respond to letters from the Oversight Committee in February and March asking him to come in for a voluntary interview.

Cummings indicated in a letter to the White House on Monday that the subpoena for Kline is the first of many the committee has in its back pocket to compel witnesses to come forward for information about potential abuses of the White House’s security clearance policy.

The White House has actively resisted Cummings’ probe into the security clearance issue after multiple media outlets reported last year that President Donald Trump personally overrode the decisions of career security officials not to give clearances to senior advisers Ivanka Trump and Jared Kushner, the president’s daughter and son-in-law, in addition to others.
N/A by N/A is licensed under N/A